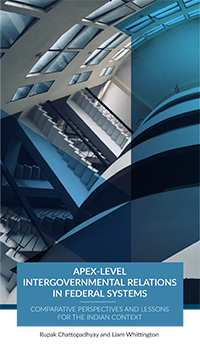 of the World Bank as part of its submission to the Fifteenth Finance Commission of India.

Cooperative Federalism is a concept of federalism in which national, state, and increasingly local governments interact cooperatively and collectively to solve common problems, rather than making policies separately but more or less equally. The complexity brought on by globalization means that even in traditionally dualist federations like Canada, the U.S., and Switzerland, where each order of government has its own constitutionally mandated tasks, different orders need to work collaboratively to obtain policy outcomes that no single order of government could on its own.

Obtaining international agreements on free trade or now tackling climate change are the most wellknown examples of policy issues that have forced multiple orders of government to work together. Cooperative federalism therefore requires robust mechanisms for promoting intergovernmental relations (IGR). This paper aims to offer a comparative survey of recent trends in intergovernmental relations and to draw out some implications for the Indian context.

IGR are an integral part of every federal system, and interaction and interdependence between different orders of government is becoming increasingly important as actors strive to improve governance. Federal partners share information, create joint institutions, determine each

other’s roles in the case of shared competences, negotiate over funding, and conclude formal agreements over the performance of respective functions. Federal nations vary in relation to their history, geography, constitutional framework, legal culture, distribution of competences or resources, and federal design. Consequently, IGR can take a wide variety of forms, often in response to the design of the federal system and culture around it. IGR may involve any or all levels of government, legislatures, executives, and quasi autonomous agencies.

There is a multiplicity of existing IGR mechanisms, and different federal systems are subject to diverse pressures in relation to: timing; partisan politics ideology; key policy areas; economic conditions; and institutional channels of conflict and collaboration. In spite of these differences, the majority of federations rely on a mixture of vertical and horizontal IGR mechanisms, and on both formal and informal practices. Various levels of government engage in conflictual and consensual dealings.

This paper is primarily concerned with the vertical IGR and the important role that Apex level IGR platforms can play in bringing about whole of government coherence on a range of public policy issues in any country. While almost all federations have relatively dense networks of intergovernmental interactions on a sectoral basis, this has not always led to the establishment of successful or effective Apex level IGR institutions. The paper provides a comparative analysis of nine federal countries, covering two integrated and seven dualist federations; and three presidential and six parliamentary federations.

The paper reaches the following conclusions. First, normative concerns around the issue of democratic accountability aside, the most effective Apex level IGR are executive driven. Second, the most effective forum/institutions for Apex level IGR are housed within central agencies at the federal level, or are autonomous institutions. Third, regardless of whether Apex IGR mechanisms are constitutionally mandated, the formalisation of key IGR institutions and mechanisms can help to ensure that governments interact with one another on a regular (and ideally meaningful) basis.

Fourth, previous practice suggests that an IGR system which combines both formal and informal elements is likely to achieve better, more productive policy outcomes. Interpersonal relationships developed through the combined elements are a key component of successful IGR management.

Lastly, although the above details generalizable conclusions of this study, it is critical to keep in mind that above all, context matters and there is no single ‘one-size-fits-all’ solution or method of best practice. At best one can draw some lessons from these general observations which could be applicable in other countries.

Keeping in mind lessons from international practice, one can draw the following inferences for the Indian context. First, its constitutional mandate makes the Interstate Council an ideal forum for Apex level IGR. The abolition of the Planning Commission and the uncertain future of the National Development Council provides a unique opportunity to address the hitherto fragmented nature of Apex level IGR by consolidating all IGR under the umbrella of the Interstate Council. A number of government commissions have recommended the application of conflict resolution mechanisms, as well as regular meetings of the ISC. Second, a relocation of the ISC to a central agency such as the cabinet secretariat or Prime Minister’s Office would provide it with the leverage required to coordinate across government. This would be on the pattern of the more successfully established Apex IGR bodies like COAG in Australia, IGA in Canada, or PCC in South Africa. Functions of existing sectoral IGR bodies such as the GST Council, River Water Tribunals or Central Water Commission could be subsumed as thematic working groups within the ISC mechanism. In parallel, the Zonal Councils could continue to function as territorially based sub-committees within the ISC mechanism. NITY Aayog would have an important role to play by bring issues on the good governance agenda before ISC and/or evaluating the outcomes of ICS interactions. Indeed, one could argue that relocating responsibility for the ICS to a central agency would help address the issue of attractiveness and morale and greatly enhance access to human and financial resources.