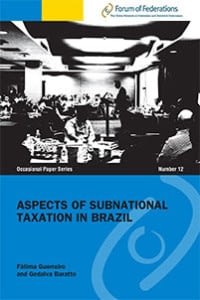 Fátima Guerreiro is a senior official with the Ministry of Finance of the State of Bahia, Brazil, where she holds a permanent position as Fiscal Auditor. Fatima holds a Masters (LLM) in International Economic Law from Warwick University, UK, a Certificate in Tax Law from the Federal University of Bahia, Brazil, and a BA in Law from the Catholic University of Salvador, Brazil. She represents her state in the Fiscal Forum of the Brazilian States (FFEB), which she helped create and currently manages. FFEB seeks, to improve fiscal federalism in Brazil. She has also worked in the design of Brazilian States tax legislation and in the construction of a theoretical basis on fiscal issues for the Brazilian States. Fatima has been involved in debates and working groups dealing with constitutional changes of the Brazilian tax system and took part in the tripartite meetings among federal and state ministers of finances, members of the parliament and senior officials to debate the tax reform. She also works closely with the Council of Ministers of Finance of the States (CONFAZ) which is in charge of tax policies in Brazil.

Gedalva Baratto is a Senior Tax Auditor of the Secretary of Finance of the State of Parana, Brazil. She has played a major role as advisor of the cabinet of the Secretary on fiscal matters and as coordinator of the board in charge of the analysis of the revenue rating of the Brazilian States at the Technical Permanent Commission of ICMS. Gedalva, has broad experience in dealing with Brazilian subnational taxation, took part of the Program of Studies of Fiscal Forum of Brazilian States – FFBS during which she wrote a number of important works on Brazilian indirect taxation of goods and services and tax harmonization. She holds a Master’s degree in Economics by the Federal University of Paraná, as well as Certificates in Public Administration by the Getulio Vargas Foundation, in Economic Analysis by the Federal University of Paraná and in Tax Law by the Law School of Curitiba.