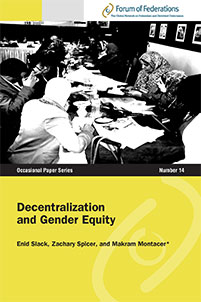 Enid Slack is the Director of the Institute on Municipal Finance and Governance (IMFG) and an Adjunct Professor at the Munk School of Global Affairs at the University of Toronto. Enid has been working on municipal finance and governance issues in Canada and abroad for 35 years. She has been retained by the Forum of Federations, World Bank, IMF, CIDA, UN Habitat, and ADB to work in countries such as Brazil, China, Colombia, India, Mexico, Mongolia, Philippines, and South Africa. Enid has written several books and articles on decentralization, property taxes, intergovernmental transfers, financing municipal infrastructure, and municipal governance.

Zachary Spicer is a post-doctoral fellow with the Institute on Municipal Finance and Governance (IMFG) at the Munk School of Global Affairs at the University of Toronto. He received his PhD from The University of Western Ontario in 2013. His research has been featured in a variety of academic journals, including the Canadian Journal of Urban Research, Canadian Public Policy, and Canadian Public Administration.

Makram Montacer is an Assistant Professor at the Institute of Management, University of Tunis, Tunisia. He obtained a PhD in Economics in 2004 from the University of Nice-Sophia Antipolis in France. His research fields of interest are spatial disparities, local and regional development, urban policies and decentralization. Since the Tunisian revolution (January 2011) he has served on several panels for the Tunisian Government and the Presidency and has written many reports for national and international organizations, including The Forum of Federations, advocating a Tunisian model of decentralization and a new municipal reform. He is also practicing local and regional development through the implementation of projects and programs for Corporate Social Responsibility (CSR) policies of oil sector companies in Tunisia.