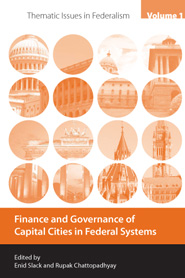 Finance and governance of capital cities in federal systems

Capital cities are unique because they are not only the seat of the national governments, but also serve as the host of national institutions – legislative buildings, museums, arts centres – for which federal governments are responsible.

Capitals take on political, administrative, cultural, and symbolic roles that differ from other cities. At the same time, they are cities in which people live, use local services, and engage in local political activity. Although many of the political, cultural, and symbolic functions of capital cities in federal countries are similar, there is considerable variation in many of the other characteristics of these cities. Using capital cities in Australia, Belgium, Canada, Ethiopia, Germany, India, Mexico, Nigeria, South Africa, Switzerland, and the United States as case studies, this volume’s contributors examine federal policies towards capital cities, with a particular emphasis on how capital cities are funded and governed, and the extent to which federal governments compensate them for their unique and important roles.