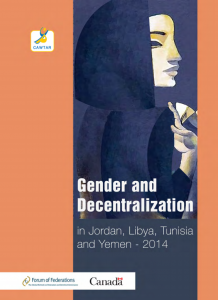 This publication has been produced for the Forum by The Centre of Arab Women for Training and Research (CAWTAR) to explore the nexus between women’s political participation and decentralised governance and to reflect on the cause and effect relationship between decentralisation and gender as well as the impact that the process of decentralization may have on women’s political participation and on gender in general. It also examines both the potential advantages and risks of decentralisation for women. An international steering committee comprised of two international experts provided oversight and direction on both the structure and content of the paper. The national status reports were prepared by national experts indentified and supervised by CAWTAR. Much of the input was collected via focus group discussions organised with the participants attending the training sessions held within the framework of the Middle East and North Africa (MENA) Gender and Decentralization programme.