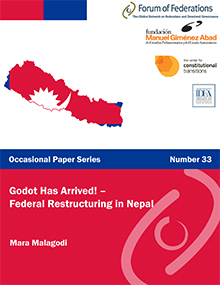 This Occasional Paper analyses the process and modalities that led to the federalisation of Nepal’s unitary state. It explores the historical circumstances in which demands for federalism emerged and the federal settlement enshrined in Nepal’s new Constitution promulgated on 20 September 2015. The question of federalism gained prominence in Nepal’s public discourse during the ‘People’s War’, the ten-yearlong armed insurgency (1996-2006) launched by the Communist Party of Nepal (Maoist) to overthrow the government. In fact, the drafting of Nepal’s seventh constitution was part of the peace process that began in 2006. The new dispensation was expected to reflect the political commitment to ‘building a New Nepal’ – an inclusive and democratic polity – through a radical programme of state restructuring. The Maoists, together with various ethno-cultural and regional groups, argued that the 1990 Constitution, which was to re-democratize the country after thirty years of Panchayat monarchical autocracy (1960-1990), inadequately addressed – if not reinforced – patterns of exclusion of many groups on the basis of class and/or identity and they saw territorial autonomy for ethno-linguistic and regional groups as the key solution to the country’s rampant discrimination.

In April 2008, the first Constituent Assembly (CA1) was elected. It featured a relative Maoist majority, but was politically fragmented. The CA1 was unable to finalise and promulgate the new document due to profound disagreements over key matters, with federal restructuring proving to be the most contentious issue. The CA1 process led to the polarisation between ‘pro-ethnic federalism’ political forces – the Maoists and various Madhesi parties – and ‘anti-ethnic federalism’ forces – the Nepali Congress, the various National Democratic Parties (RPP), and to a certain extent the Communist Party of Nepal (United Marxist-Leninist) (UML). After four extensions, the CA1 was eventually dissolved in May 2012 and a second Constituent Assembly (CA2) was elected in November 2013. The elections brought a relative majority to centrist parties – the Nepali Congress and UML. Following the disastrous earthquakes that hit Nepal in April and May 2015, the drafting of the new constitution was ‘fast-tracked’ leading to its promulgation in September. The new document, however, was met with growing protests in the Terai plains near the Indian border and an unofficial trade blockade by neighbouring ‘India’. At the time of writing, the new dispensation has already been amended once, and negotiations over a second amendment have been ongoing for over a year with regard to the controversial demarcation of the federal units. It is important to note that at the time of writing in February 2018 the creation of the federal units of government has just started to take place after the elections in 2017.