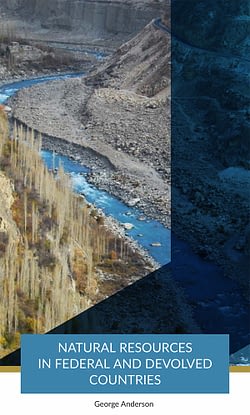 Successful governance of natural resources is one of the major challenges confronting mankind if we are to avoid disastrous climate change and many other serious environmental risks.  Each natural resource is exploited within a physical space, as well as in a social and political context. There can be disputes and even violent conflict over ownership, governance, benefits and environmental damage.  These can play out at the national, regional and local levels. This paper surveys experience and issues around natural resource governance in federal and devolved countries. It also briefly reviews types of resource conflict and provisions in peace agreements dealing with natural resources.

The paper compares the differences between extractive resources—minerals and especially oil and gas—which can generate huge revenues for governments, and water and land, for which the actual use, not fiscal benefits, is typically the prime concern. Constitutional responsibility for the different types of natural resources varies greatly. Some regimes are highly centralized, while in others there has been significant devolution of powers over certain resources.

Control of oil and gas and other valuable minerals and their revenues can be the object of major political conflict, especially when they are important to the national economy.  In this context, the key constitutional powers are those over mineral rights, revenue determination, environmental protection, and petroleum and mineral transportation and marketing.  Constitutional “ownership” of the resource may determine which order of government leads on management, but in some cases it does not.  In addition, the sharing of the fiscal benefits does not necessarily reflect ownership.

In the older federations—the USA, Canada and Australia—the states have considerable powers over minerals, but in most modern federations the central government controls the major levers of mineral development.  Although fiscal federalism theorists generally argue that the lead responsibility for governance of petroleum and other extractive minerals in federal and devolved regimes should be with the central government, this applies most often when the resource is central to the national economy and needs to be squared with regional and regional interests.

The politics around water resources in federal and devolved regimes relate overwhelmingly to their actual use and physical management.  Government revenues from this source are usually relatively minor.    Older federal constitutions may not explicitly mention water or rivers, and governments thus need to rely on a variety of constitutional powers. This can make coherent management difficult.  Most newer federal constitutions do explicitly refer to water and rivers. Some make all rivers a federal responsibility, while others distinguish between federal and state rivers.  Water policy experts favour the integrated management of major river basins, and for some countries have developed joint management regimes between central and regional governments. Developing such regimes can nevertheless be a challenge.

Major land policy objectives in some federal and devolved countries include ending feudal land holding, breaking up large estates, nationalizing large unused lands and protecting the rights of pastoralists and traditional communities. More generally, there is a concern to promote sustainable land use. The lead on land issues can be with the central government, the states or concurrent (shared by the two orders of government). Responsibility is often determined through a variety of constitutionally assigned powers. In some countries, the territorial rights of indigenous communities may have special protection.

The paper also reviews who has what powers to raise natural resource revenues, how revenues are distributed and how expenditure responsibilities are assigned. The principles and mechanisms for allocating these revenues vary considerably.  Petroleum is the most important resource in this regard, but others can be significant.

Finally, the paper outlines a number of principles of good resource governance. Such principles are rarely reflected in constitutional arrangements but should be more fully incorporated into actual practice in federal and devolved regimes.