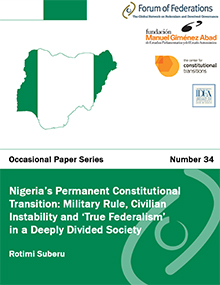 Forum of Federations, Fundacion Gimenez Abad, International IDEA and The Center for Constitutional Transitions are proud to present the 10th Occasional Paper which explores Nigeria’s long-running efforts to design and improve constitutional institutions.

As one of the world’s most deeply divided countries, Nigeria perennially has sought to redesign constitutional institutions to contain inter-group conflict. The struggle to stabilize Nigeria’s fragmented society has seen wide-ranging institutional experiments, including civilian and military rule, centrifugal and centralized federalisms, presidential and parliamentary systems, and various institutions for restraining the legendary political corruption at the heart of the country’s disintegrative ethno-political conflicts.

This Occasional Paper analyzes the background, procedures, structures, and aftermath of Nigeria’s constitutional transformation under military auspices from a relatively decentralized, parliamentary federation of four ethnic regions to a centrist, presidential, 36-state, federalism. There was a momentous constitutional transition over nearly thirty years of military rule from 1966 to 1999, with a brief civilian interregnum during the Second Nigerian Republic (1979-83), during which the military created a strong central government. The military dominated the constitutional transition process, despite the cooptation of civilian drafting committees and constituent assemblies. Despite the resilience and ingenuity of the military’s constitutional legacy, significant challenges have developed since the return of civilian rule, reacting against the military’s non-participatory procedures, centrist structures, and relatively weak investment in critical institutions of restraint. These challenges, which have often come under the rubric of “political restructuring” and a quest for democratic “true federalism,” have spawned a relentless constitutional politics, underscoring the permanent or continuous nature of Nigeria’s constitutional transition.