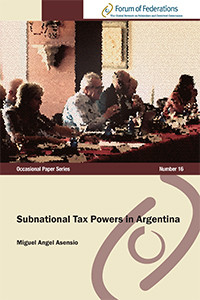 Miguel Angel Asensio is Doctor in Economics and History. University Professor at the Universidad Nacional del Litoral in Santa Fe, Argentina and other Universities, he taught in the former for 38 years where currently is Director of the Doctoral Program in Public Administration. He was visiting professor in Canada, the United States and Spain and adviser of the World Bank, Organization of American States and other organizations, and of the National Senate. Former Undersecretary of Public Finance, from 2002 to 2003, he served as Minister in the Ministry of Treasury and Finance of the Province of Santa Fe. He has written thirteen books on subjects ranging from public finance to Argentine economic history to fiscal federalism. He usually attends the Meetings of IACFS and presides the Two Centuries Foundation.