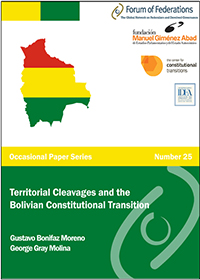 As part of a special project, Forum of Federations, Manuel Gimenez Abad, the Center for Constitutional Transitions and International Idea collaborated on an exclusive series of Occasional Papers examining territorial cleavages in a multititude of countries. This volume by Marie-Joëlle Zahar is the second in this series. Please see all the released OPS in this series here: Occasional Paper Series on Territorial Cleavages

Gustavo Bonifaz Moreno and George Gray Molina with support from the Forum of Federations, International IDEA, Center for Constitutional Transitions and The Foundation Manuel Giménez Abad for Parliamentary Studies and the Spanish State of Autonomies author this Occasional Paper on Territorial Cleavages and the Bolivian Constitutional Transition. The Occasional Paper describes the historical dynamics behind the 2006-2008 constitutional transition and the political process during that period. Our focus is on territorial dynamics, in a country divided from east to west by a decades-long political, ethno-cultural and economic divide. For a relatively weak state with multiple political accommodation mechanisms, the key tension ran deep, beyond the formalities of legal, electoral and constitutional reform.

The authors maintain that the Bolivian transition cannot be explained merely by the inner-workings of the constitutional process itself, but by the broader political dynamics, which broadened territorial support for the Movimiento al Socialismo (MAS) from western enclaves to the eastern lowlands over a five-year period. The constituent process took place simultaneously in different arenas: the formal institutions of Parliament and the Assembly, popular mobilization in the streets, and electoral competition between the blocs in conflict. This political shift was buttressed by two key institutions: an impartial electoral court and a functioning constitutional tribunal. These “second-tier” institutions secured the broad legitimacy for constitutional reform. They were helped by the conciliatory support of South American heads of state (through UNASUR), during a polarizing episode of political violence in Pando in September of 2008. The new constitution, approved in a referendum in 2009, secured long-lasting social and collective rights achievements and launched a new period of political stability in Bolivia. However, the process was highly polarizing and kept the political situation on edge. Many important issues –unresolved tensions from the past—were kicked forward, including key territorial issues such as fiscal decentralization and the legal status of indigenous, regional and departmental autonomies.