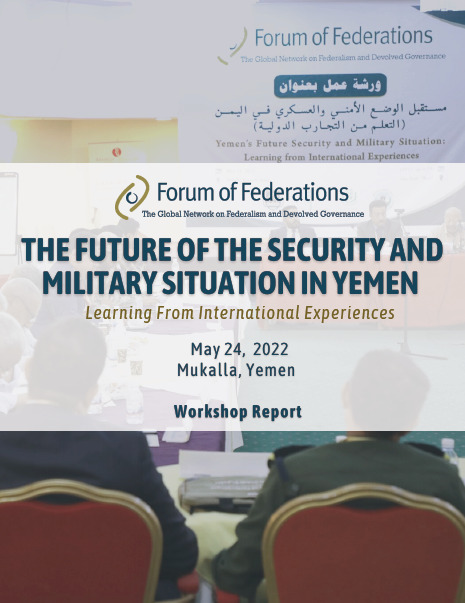 2022
The Future of the Security and Military Situation in Yemen: Learning from International Experiences

Given the current political and security situation in Yemen, the PLC mobilized as an urgent national necessity to bring together all anti-Houthi armed forces and to place them under a unified command to serve a single military objective. In 2021, clashes in Southern Yemen between the STC forces and the forces affiliated with the government of (now former) President Abdo Rabbu Mansour Hadi had taken place, wherein both groups fought to extend their control over as much territory and future institutional structures as possible in Southern Yemen.

In order to gain a deeper understanding of the military and security situation in Yemen, the Forum of Federations (the Forum) convened a one-day workshop with experts and practitioners in May 2022 in Mukalla entitled “The Future of the Security and Military Situation in Yemen: Learning from International Experiences.” The workshop sought to build on two previous Forum reports by Dr. Amit Gupta on the subject – “Reintegrating Warring Yemeni Forces: Lessons from Other Cases” as well as “The Integration of the UAR Armed Forces: Tentative Lessons for Yemen.”