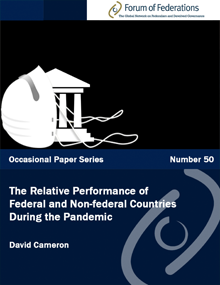 The Relative Performance of Federal and Non-federal Countries During the Pandemic: Number 50

The Relative Performance of Federal and Non-federal Countries During the Pandemic3 The story of COVID-19 can be divided into two broad, overlapping phases. The first phase covers the period from the initial outbreak of the pandemic at the beginning of 2020 until about January 2021. That is the time when – without a preventive vaccine – the world struggled to contain its spread and to provide health care to those who fell ill. The second phase of the story starts in early 2021, when effective vaccines began to be manufactured and administered to national populations. Assessing the performance of a country in the first phase focuses on how well the infection was contained and how many people lost their lives to the disease. Assessing performance in the second phase will continue to involve assessing infection-containment and death-reduction measures, but will in addition entail an evaluation of how effectively vaccinations were administered to a country’s population.1 This chapter restricts itself to examining performance in the first phase.

How well have federations performed in comparison with non-federal countries? Is there any evidence to suggest that federations have handled the coronavirus crisis better or worse, or differently from unitary states? It is this matter that I propose to discuss in this chapter.

A pandemic is an acid test of the relationship between citizens and their governments, particularly in democracies. It can be compared to the total mobilization of civil society that was mounted in the United Kingdom, the United States, Canada and elsewhere during the Second World War, when governments made it clear that victory could only be achieved if every citizen played an active role in the war effort. In the COVID-19 pandemic, it was manifestly true that citizens who did not wear masks, maintain social distance and avoid travel were putting themselves and society in mortal danger. Rarely has the link between individual behaviour and collective well-being been more directly drawn. Governments at all levels attempted to strike the right balance between education, exhortation, peer pressure and coercion for optimal response to the crisis.

In this chapter, we will be scrutinizing how the pandemic was managed, not how the economy was supported or how the balance was struck between the two. Balancing the conflicting pressures of public health and the economy is an inescapable part of the responsibility of all governments coping with the pandemic, but that is not as such the focus of this chapter. How effective have the public health and medical responses to the virus been? That is the question. Clearly, the economic pressures may have led governments to close down too late or open up too soon. If those policy choices have affected the performance of governments and populations in managing the pandemic, that will be reflected in the health outcomes, but the economy as such does not fall within the purview of this chapter.