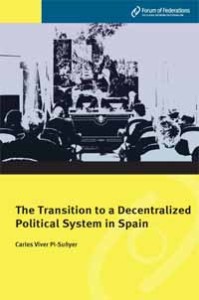 The Transition to a Decentralized Political System in Spain Number 4

Carles Viver Pi-Suñer is a constitutional expert and Direc-tor of the Institut d’Estudis Autonòmics (Institute of Autonomous Studies – IEA) of the Government of Catalo-nia. He is also President of the Constitutional Court of Andorra, a member of the Catalan Legal Advisory Commis-sion and a professor of Constitutional Law at Pompeu Fabra University. Through his work at the IEA, he partici-pated in the elaboration of preparatory works for the 2006 Catalan Statute of Autonomy and wrote a book on that subject. He was also a member of the commission that created Pompeu Fabra University and the first dean of that institution’s Faculty of Law. Carles Viver sat as a judge of the Spanish Constitutional Court from 1992 to 2001 and was its deputy president from 1998 to 2001. He has received multiple honours from the Government of Catalo-nia, including the Premi Justícia de la Generalitat de Catalunya in 2002. Mr Viver’s research and publications have focused on territorial organisation of the state, legis-lative technique, constitutional jurisdiction and regional autonomy. He has been a reviewer for Publius: The Journal of Federalism and for Llengua i Dret.