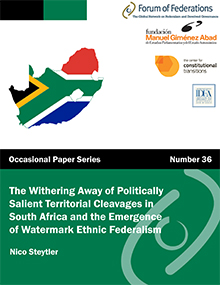 The Withering Away of Politically Salient Territorial Cleavages in South Africa and the Emergence of Watermark Ethnic Federalism: Number 36

Forum of Federations, Fundacion Gimenez Abad, International IDEA and The Center for Constitutional Transitions are proud to present the 12th Occasional Paper which explores the transformation of territorial cleavages in South Africa.

The policy of apartheid was an attempt to territorialise the white / black racial cleavage through the creation of bantustans, confining black political aspirations to 13 percent of the country, while the remainder of the country continued under white minority dominance. This was to be done by fracturing blacks into ethnic-based territories. The failure of, and resistance to, apartheid resulted in the ‘constitutional moment’ from 1990 to 1996 where the two major protagonists, the white minority, represented by the National Party (NP) and the African National Congress (ANC) sought to unmake the political salience of these manufactured territorial cleavages; they created a new narrative of a nonracial, non-ethnicity society and thereby undercut the salience of territory. This project was violently resisted by polities whose very political base lay in territory – the Afrikaner right wing and Zulu nationalists. However, the non-racial, non-ethnic narrative was dominant, although allowances were made for very limited accommodation of ethnic-based territories.

After 25 years the unmaking of the salience of territorial cleavages has largely been successful; territorial politics based on race and ethnicity have largely withered away. Right-wing Afrikaners and Zulu nationalists’ demands for an ethnic homeland have evaporated. Although ethnicity amongst the Africans has not disappeared, it is currently well catered for through a weak federal system. The non-territorial black/white divide, manifested by the continued inequality in wealth between the two racial groups, is still the dominant cleavage, which has led to the increasing questioning of the non-territorial comprise between the ANC and the NP over the protection of property rights.

The important lessons from the successful unmaking of territorial politics include: a common commitment to peace; the framing of the transition to democracy in non-racial terms; the willingness to make asymmetrical deals with obdurate ethnic entrepreneurs; the strategic use of ambiguity in agreements and temporizing final outcomes; the very limited use of foreigners in the negotiations; and the holding of elections both to structure the process as well as providing legitimacy to the end product – the constitutional settlement.