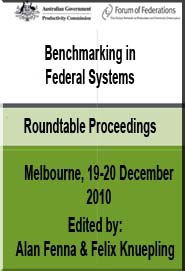 The publication, edited by Alan Fenna from Curtin University in Perth and Felix Knüpling from the Forum, is based on an international conference the Forum of Federations and the Productivity Commission held in Melbourne in late 2010, bringing together government officials, academics and practitioners from Australia and a number of other countries.

This volume provides updated and elaborated versions of the papers presented at the Roundtable. The Roundtable provided the opportunity to compare Australian approaches to ‘benchmarking’ with those followed in the United States, Canada, the United Kingdom and Germany, as well as at the European Union level.

The conference and this publication are part of the Forum’s program “Benchmarking in Federal Systems”. The program’s objectives are to generate comparative knowledge on the experiences of federal systems in introducing benchmarking methods in policies executed by constituent units as a way to foster learning and to improve performance. The program has an explicit focus on the implications of using benchmarking as an alternative to controls tied to fiscal transfers but also on the politics of benchmarking – how to put it in place and make it work.

Building on the Melbourne conference, the Forum of Federations and the Cardiff Business School are currently running a joint program on “Learning by Comparing: Benchmarking and Performance Assessment in Public Services”. This project is co-funded by the Economic and Social Research Council of the UK.Download a pdf version of “Benchmarking in Federal Systems”