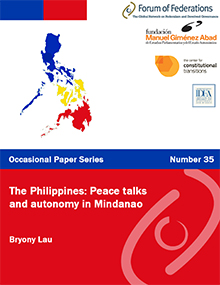 The Philippines: Peace talks and autonomy in Mindanao: Number 35

Forum of Federations, Fundacion Gimenez Abad, International IDEA and The Center for Constitutional Transitions are proud to present the 11th Occasional Paper which explores how the Philippines have tried to use governance processes autonomy to solve the north/south challenges.

This Occasional Paper explains why it has taken so long to resolve the territorial cleavage in the southern Philippines even though both sides recognize autonomy as the solution. Political interests in Mindanao and in Manila have repeatedly stood in the way, even while the 1987 constitution made autonomy possible. A major constraint has been procedural: to create a Moro autonomous region, the constitution requires legislation in Congress and a plebiscite in affected areas. This two-step process has allowed opponents of autonomy to block its implementation or to limit the territory and powers of such a region.