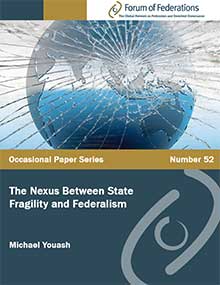 In early 2020, before Covid-19 struck, 23 percent of the world’s population lived in fragile contexts, which the Organisation for Economic Co-operation and Development (OECD) characterizes as “the combination of exposure to risk and insufficient coping capacity of the state, systems and/or communities to manage, absorb or mitigate those risks” (OECD 2020, 15). In 2019 fragile contexts represented 22 of 31 cases of ongoing, state-based conflict (OECD 2020). Even in the less extreme situations, there is a failure of governance that often has negative impacts beyond a given country’s borders. Where there is a will to stabilize the situation, various constitutional and governance models may be on the table. In certain cases, these include federalism. The principal objective of this paper is to improve understanding about the nexus between state fragility and federalism by reviewing research from the relevant literatures. State fragility research encompasses a far wider range of subject matters relevant to resilience than federalism studies. Moreover, it is implicated in a development assistance apparatus that in 2018 spent more than US$70 billion in fragile contexts.2 Federalism studies – a growing field – address ways in which power can be dispersed not only to more than one order of government but also to identity-based communities and groups that seek protection from central authority and a recognized role within governance. One important linkage between state fragility and federalism concerns the impact of deep ethnic/racial/religious divisions – sometimes referred to as severe identity fragmentation. The literature review carried out for this paper demonstrates that severe political identity fragmentation, which may well be territorially based and associated with weak support for national governing institutions, often prevents progress in fragile contexts. Findings from the state fragility literature suggest that federalism may offer a path to greater state resilience in certain fragile contexts, in part by expanding inclusion in decision-making, including through intergovernmental processes. This avenue has the potential to reduce contestation, increase state legitimacy and equip various groups and other actors to learn from and potentially influence each other. However, further exploration is needed to identify when federalism (in one of its many forms) is suitable and how best to pursue it. This paper begins with a brief review of how state fragility and federalism are conceptualized. Key findings from research on state fragility and federalism are then summarized in section 2, with a view to identifying ways to bridge the two literatures. The third section discusses the merits of involving subnational governments and others in decision-making processes. Section 4 examines the potential benefits of structuring the engagement of key actors (beyond the national government) in the mobilization of public resources. The fifth section considers possible elements of a research agenda drawing on both literatures.