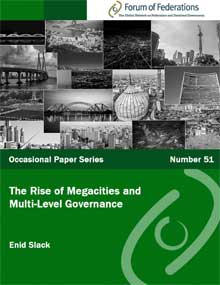 The 21st century has witnessed a rise in the number of cities that are home to more than 10 million people, commonly known as megacities. Currently, 12 percent of the world’s urban population lives in megacities – places such as Buenos Aires, Los Angeles, Mexico City, and Mumbai. Megacities are a reasonably recent phenomenon in the history of cities, however: in 1950, there were only two megacities– New York and Tokyo. By 1990, there were 10. In 2018, there were 33 and the number is expected to increase to 43 by 2030, most of which will be located in less developed countries. Of the 33 megacities around the world today, 15 are located in nine federal countries. This paper examines a series of questions about megacities in federal systems. What are the opportunities and challenges faced by megacities in a multi-level governance system? How are they governed? Where do they fit in the multi-level governance system – do federal and provincial/state governments embrace megacities or do they feel threatened by them? Of course, as Nico Steytler correctly noted in his presentation at a May 21 Forum of Federations webinar on Megacities and Federal Governance, megacities do not easily fit into the federal model because they are not a legal authority that can be granted powers or resources (Forum of Federations 2021). Rather, they are functional urban areas without an over-arching governance institution.1 This reality raises the question about how to make decisions, and deliver and pay for services to 10 million people or more when they are not organized into a municipality or a province/state. Lastly, the paper looks at what megacities in a federal system need to succeed.