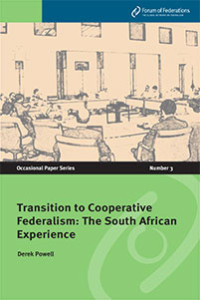 Derek Powell is a senior researcher at the Community Law Centre, University of the Western Cape, South Africa. He was formerly a Deputy Director-General in the South African government, where he served from 1996-2009. Prior to joining government, he was head of the research department at the Constitutional Assembly during the two-year constitution-making process. He was a law lecturer and worked in a non-governmental organization. He holds a BA (Law), LLB and LLM from the University of Cape Town and an LLM from Duke University (USA). His LLD research focuses on the role of local government in peace-building in countries emerging from conflict.