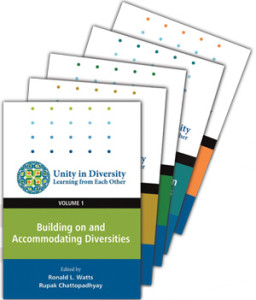 Unity in Diversity: Learning from Each Other

The series draws on papers prepared for – the 4th International Conference on Federalism held Nov. 5—7 2007 in New Delhi, organized in partnership with the Inter-State Council Secretariat, Government of India.

The theme of the conference was Unity in Diversity: Learning from Each Other.

The five volumes deal with the themes of Building on and Accommodating Diversities, Emerging Issues in Fiscal Federalism, Interaction in Federal Systems and Local Government in Federal Systems. The fifth volume of the series, Policy Issues in Federalism: International Perspectives, brings together a selection of papers from the Forum’s Young Professionals Programme.

The first volume Building on and Accommodating Diversities draws attention to the extent to which diversity is not to be viewed simply as a problem but as an asset to be built upon in the process of nation-building. This volume also makes the very important point that diversity can enrich a polity. Nation-building is a necessity when the social milieu is diverse, and the various constituent groups need both identity and voice within the nation state rather than marginalization or homogenization.

The second volume Emerging Issues in Fiscal Federalism discusses the financial arrangements within a federation and how they have a significant impact on its operation. These arrangements can be especially salient and volatile in federations characterized by high levels of diversity wherein various groups are highly sensitive to who pays what and who gets what out of any given system of fiscal federalism.

Vol. 3: Interaction in a Federal System
Edited by John Kincaid and Rupak Chattopadhyay

Interaction in a Federal System takes a closer look at the unavoidability of overlaps in the responsibilities of governments within a federation, as well as the existence of culturally diverse constituent political communities in most federations. It goes on to show how intergovernmental interaction has been an important element in all federations.

The fourth volume Local Government in Federal Systems deals with the importance of local governments and metropolitan regions. It emphasizes local government’s closeness to civil society and its role in enabling disadvantaged groups, including women, to participate in governance. The volume also looks at the differential constitutional arrangements for local governments in federal countries and highlights the complex challenges of governing megacities.

This volume brings together a selection of papers from the Young Professionals Programme, offering a new perspective on the themes discussed in the earlier four volumes by reflecting on future challenges in these areas.

The series is published by Viva Books Ltd., and can be ordered by emailing vivadelhi@vivagroupindia.net, or calling from Canada direct: 011 91 11 422 422 00