Minority rights refer to customary individual rights as applied to all members of society, including racial, ethnic, class, multi-ethnic or multi-cultural state. One group of minorities that tend to be overlooked in Federations are immigrants. Immigrant integration has taken on a much greater salience in traditionally immigrant-receiving countries, including some federations in the developing world. Immigrants and other minorities have an advantage in Federal countries as federalism enhances minority rights as they can participate in political activity at the local and regional levels.

Increasingly, there is a need to find ways to coordinate and harmonize laws, policies, standards and programs. Immigrant integration can be seen as the means to allow newcomers to participate in the host country’s economic, social, and civic life. Acquiring these capacities is the responsibility not only of newcomers but also the host society and its institutions. Thus, policy examination should look at immigrant integration in three categories: selection/admission, economic and social integration, and civic and political integration. 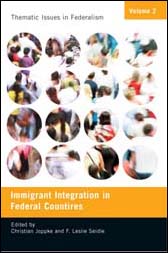 Where can you find the world's largest open access database for
all your ➡️𝐆𝐨𝐯𝐞𝐫𝐧𝐚𝐧𝐜𝐞 ➡️𝐅𝐞𝐝𝐞𝐫𝐚𝐥𝐢𝐬𝐦 ➡️𝐏𝐨𝐥𝐢𝐜𝐲 needs?