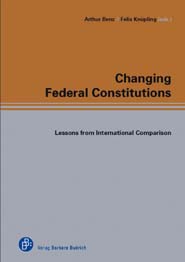 This book analyses constitutional change in federal and decentralizing countries from a comparative perspective. The countries that are covered are Switzerland, Austria, Germany, Belgium, Canada, Spain, Great Britain, Italy, and France. The authors identify structures, processes and strategies which have proven to favour successful constitutional amendments. Thereby, the book enables public officials, scholars, and students to learn from the constitutional reform experiences of other federal democracies and from practical suggestions how future reforms could be designed. The volume is based on a research project carried out at the Institute for European Constitutional Science, FernUniversitat in Hagen and the Institute for Political Science, Technische Universitat Darmstadt and on an international conference co-organized by the two institutes and the Forum of Federations that took place in Germany’s Bundesrat in February 2011. The knowledge accumulated in Forum of Federations’ previous engagement in various comparative research projects concerning constitutional reforms in federal systems has also contributed considerably to both the conference and the present volume.