About Mission Statement The Forum Advantage History Strategic Plan
About

The Forum is an international organization that develops and shares comparative expertise on the practice of federal and decentralized governance through a global network.

The Government of Canada provided the impetus for the establishment off the ground with the inaugural International Conference on Federalism held in 1999 at Mont Tremblant, Quebec, Canada. This conference led to the founding of The Forum as an ongoing institution, based in Ottawa. Four consecutive International Conferences have subsequently been held in Switzerland, Belgium, India, and Ethiopia. Following the 2005 Conference in Belgium and the partnership of a number of countries with The Forum, it became a truly international organization. Ten governments have now signed agreements with the Forum and are represented on the Forum’s Strategic Council, supporting the activities of the organization and providing expertise. These countries are Australia, Brazil, Canada, Ethiopia, Germany, India, Mexico, Nigeria, Pakistan, and Switzerland. The Forum has operated field offices in Ethiopia, Sudan, Nepal and Nigeria. Over the years, The Forum has expanded the focus of its work from established federal countries to include countries in post-conflict situations adopting federal forms of governance and those involved in processes of devolution and decentralization.

The mission of The Forum is to strengthen inclusive and responsive governance, including pluralism and gender equality, in federal, decentralized, and transitioning countries.

The Forum has a practical, problem-solving approach to achieving results. Since its founding nearly two decades ago, it has supported governments and citizens around the world through capacity building and the provision of expertise and impartial practical education.

The Forum brings the world’s leading experts together with the “practitioners” of government: elected officials, civil servants, and political operatives. The Forum’s direct relationship with governments on each continent makes it uniquely placed to promote intergovernmental learning by working in tandem with its partner governments.

Alongside its work with key governance practitioners, The Forum also supports civil society stakeholders, enhancing understanding and building the capacity of citizens to operate in multilevel systems. Working through its extensive network of local partners, The Forum provides learning and knowledge to facilitate the participation of civil society in the multilevel governance processes which impact their lives.

The comparative approach and methodology utilized within the Forum’s work draws on its global network to promote learning and capacity building with excellence.

The comparative methodology utilized by The Forum in the implementation of its activities is based on the core principle of “Learning from Each Other”. Drawing on its unparalleled global network of multilevel governance experts, research organizations, and local partners, The Forum facilitates the sharing of experiences and insights to promote empirically-grounded learning and capacity building. Acting as a curator of knowledge, The Forum ensures governance stakeholders have the relevant theoretical and practical information necessary to develop and improve multilevel governance systems. Through liaising with local partners, situational analysis, and stakeholder consultation, The Forum closely tailors its support to local demand and contexts.

Our Core Principle: “Learning From Each Other”

Bridging the worlds of academic research and real-world practice, The Forum approach leverages the synergies between its Policy and Development Assistance activities to continuously inform and renew its body of cutting edge intellectual capital on multilevel governance. The Forum’s unique expert network and comparative approach supports those operating at the forefront of multilevel governance development.

History of the Forum of Federations

Read More about our International Conferences
Following the 2005 Conference held in Brussels, a number of countries joined The Forum as funding partners, establishing it as a membership-based international organization.

As of 2017, ten governments had signed agreements as partners of The Forum and are represented on the Forum’s Strategic Council and Board of Directors, supporting the activities of the organization and providing expertise. These countries are Australia, Brazil, Canada, Ethiopia, Germany, India, Mexico, Nigeria, Pakistan, and Switzerland. Over the years The Forum has expanded the scope of its work from established federal countries to include nation states in post-conflict situations adopting federal forms of governance and those involved in processes of devolution and decentralization. Growth led to the expansion of the organization to a range of countries around the world. As of December 2017, The Forum had field offices and/or representation in Brazil, Ethiopia, Germany, India, Jordan, Morocco, Myanmar, Nepal, Pakistan, and Tunisia.

The Forum of Federation’s Five-Year Strategic Plan establishes the overall aims for the work of the organization for the period from 1 April 2018 to 31 March 2023.

It presents the goals and strategic objectives The Forum wishes to achieve directly related to its mission of strengthening inclusive and responsive governance, including pluralism and gender equality, in federal, decentralized, and transitioning countries.

The Strategic Plan is part of a process by which The Forum is refining the definition of its work, its mission, and its institutional objectives. The process is holistic and participatory, with a renewed emphasis on enhanced monitoring, evaluation and reporting by results. This approach is accompanied by a philosophy of providing unique and specialized expertise to those The Forum engages with, while demonstrating “value for money” to partners and donors.

Since its founding The Forum has, through its unique global network, brought the world’s leading experts in federal and decentralized systems together with the “practitioners” of government: elected officials, civil servants, and political operatives. The Forum supports the development of practical solutions to federal and decentralized governance challenges, and facilitates understanding of multilevel governance among stakeholders, including civil society. This process brings clarity to how The Forum defines itself and what it is working towards. The former is expressed in the following self-definition statement.

The Forum is an international organization that develops and shares comparative expertise on the practice of federal and decentralized governance through a global network.

The statement which defines The Forum’s underlying motivation for being in business, the new Mission Statement, spells out the contribution to society that The Forum aspires to make.

The mission of The Forum is to strengthen inclusive and responsive governance, including pluralism and gender equality, in federal, decentralized, and transitioning countries.

The Plan reinforces the two primary areas of Forum activity:
Policy Programs and Development Assistance Programs (DAP). It establishes four distinct goals for the current plan period and seven strategic objectives, the achievement of which will facilitate progress with regard to the desired results.

The impact of The Forum’s work will be measured by its new results-based monitoring and evaluation system developed in parallel. This will determine the extent to which the organization is meeting its mandate as expressed by its Mission Statement. 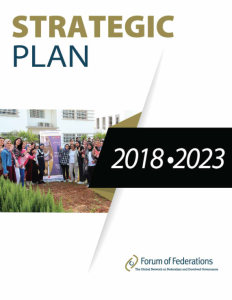