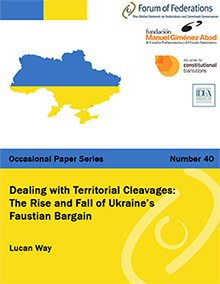 Dealing with Territorial Cleavages: The Rise and Fall of Ukraine’s Faustian Bargain: Number 40

This Occasional Paper explores efforts in Ukraine to create a constitutional system that accommodates the country’s stark regional differences. The Ukrainian case highlights the fact that, even in a context of deep cross-regional differences, regional demands for autonomy are not necessarily enduring but may fluctuate quite dramatically over short periods of time depending on the political situation in the center. Demands by territorially concentrated groups for constitutional accommodation varied significantly from the breakup of the USSR in 1991 until 2015. With the partial exception of Crimea, central actors alleviated demands for decentralization and federalism by giving key regional interests and identities a stake in central power. By the mid 1990s, a powerful coalition for centralization – sometimes referred to as the “pact with the devil” – emerged between national democrats seeking state support for Ukrainian language and national symbols on the one side; and eastern economic interests on the other seeking access to rents and administrative mechanisms for maintaining power. The collapse of this arrangement from 2010 to 2014 contributed to the onset of violent conflict.