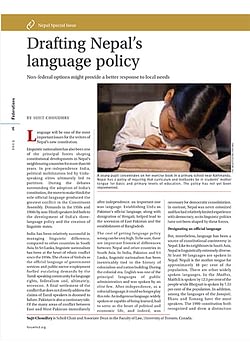 Language will be one of the most important issues for the writers of
Nepal’s new constitution.
Linguistic nationalism has also been one of the principal forces shaping constitutional developments in Nepal’s neighbouring countries for more than 60 years. In pre-independence India, political mobilization led by Urdu-speaking elites ultimately led to partition. During the debates surrounding the adoption of India’s constitution, the move to make Hindi the sole official language produced the greatest conflict in the Constituent Assembly. Demands in the 1950s and 1960s by non-Hindi speakers led both to the development of India’s three-language policy and the creation of linguistic states.
India has been relatively successful in managing linguistic difference, compared to other countries in South Asia. In Sri Lanka, linguistic nationalism has been at the heart of ethnic conflict since the 1950s. The choice of Sinhala as the official language of government services and public-sector employment fuelled escalating demands by the Tamil-speaking community for language rights, federalism and, ultimately, secession. A final settlement of the conflict that does not directly address the claims of Tamil-speakers is doomed to failure. Pakistan is also a cautionary tale. Of the many areas of conflict between East and West Pakistan immediately
EYE UBIQUITOUS/REX FEATURES
A young pupil concentrates on her exercise book in a primary school near Kathmandu. Nepal has a policy of requiring that curriculum and textbooks be in students’ mother tongue for basic and primary levels of education. The policy has not yet been implemented.
after independence, an important one was language. Establishing Urdu as Pakistan’s official language, along with denigration of Bengali, helped lead to the secession of East Pakistan and the establishment of Bangladesh.
The cost of getting language policy wrong can be very high. To be sure, there are important historical differences between Nepal and other countries in South Asia. In India, Pakistan and Sri Lanka, linguistic nationalism has been inextricably tied to the history of colonialism and nation building. During the colonial era, English was one of the principal languages of public administration and was spoken by an elite few. After independence, as a colonial language, it could no longer play this role. An indigenous language, widely spoken or capable of being learned, had to serve as the heart of political and economic life, and indeed, was necessary for democratic consolidation. In contrast, Nepal was never colonized and has had relatively limited experience with democracy, so its linguistic politics have not been shaped by these forces.
Designating an official language
But, nonetheless, language has been a source of constitutional controversy in Nepal. Like its neighbours in South Asia, Nepal is linguistically extremely diverse. At least 90 languages are spoken in Nepal. Nepali is the mother tongue for approximately 48 per cent of the population. There are other widely spoken languages. In the Madhes, Maithili is spoken by 12.3 per cent of the people while Bhojpuri is spoken by 7.53 per cent of the population. In addition, among the languages of the Janajati, Tharu and Tamang have the most speakers. The 1990 constitution both recognized and drew a distinction