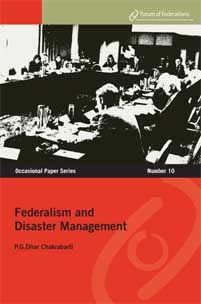 Mr. P.G.Dhar Chakrabarti is one of the senior most members of the Indian Administrative Service, presently working as Adviser in the Inter-State Council Secretariat. The Secretariat provides guidance and support to the Inter State Council headed by the Prime Minister, in which Chief Ministers of all the States besides important Cabinet Ministers of the Central government are Members. Earlier, Mr. Chakrabarti served in various capacities in Central and State governments. In his last assignment he headed for six years the National Institute of Disaster Management with additional responsibility of Director SAARC Disaster Management Centre in New Delhi, which he created. He served in a number of expert groups of the United Nations on issues related to disaster management, climate change and other issues. He was appointed by the UN Secretary General as one of the initial Members of the Advisory Group on Central Emergency Response Fund which was created by the General Assembly.