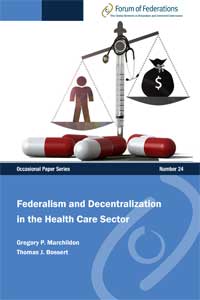 Federalism and Decentralization in the Health Care Sector Number 24

Health care is one of the most financially onerous and contested social policy responsibilities of governments in the early 21st century.

The Forum of Federations established a group to conduct a multi-country study (Switzerland, Canada, Germany, Pakistan, South Africa, Brazil, Mexico and Nigeria) on federalism and decentralization in the governance, financing, administration or delivery of health care.

Through this study, the authors developed a detailed, common template based on a comparative policy methodology developed by Rose (2005) and the use of decision space analysis as originally proposed by Bossert (1998) and as subsequently developed in the health systems literature (Roman et al. 2017).

Using a decision space analysis allowed the authors to evaluate the implementation and ongoing management – the practices on the ground – of any health system. This Occasional Paper reproduces an abridged version of the successful publication: “Federalism and Decentralization in Health Care-A Decision Space Approach”.