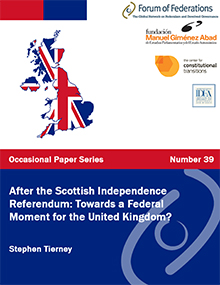 After the Scottish Independence Referendum: Towards a Federal Moment for the United Kingdom? : Number 39

This Occasional Paper addresses the independence referendum in Scotland which took place on 18 September 2014 and its aftermath, which together have created an extended and ongoing constitutional moment, the implications of which for the future of the United Kingdom remain uncertain. In the referendum 55% of Scots said No to the question: ‘Should Scotland be an Independent Country?’. It was a very dramatic event but it should also be seen as part of a long process in the gradual devolution of power in the UK, not only to Scotland but also to Wales and Northern Ireland, a process which continues to move ahead at speed. Although the referendum did not result in a vote for independence, it has sparked a further process of decentralisation. The Smith Commission, established in the days after the referendum,1 was a body given the task of drawing up further radical powers for the Scottish Parliament. This resulted in the Scotland Act 2016, which sets out a series of powers that could make Scotland one of the most autonomous sub-state territories in the world. In this chapter I discuss the institutional arrangements and political conditions that formed the background to the referendum, the referendum itself, and the aftermath in which we saw such a quick move towards further, radical constitutional change. Insofar as the referendum marks a constitutional moment it is a fluid one, with the question now being asked: is the United Kingdom edging in a federal direction?

The independence referendum stemmed from the electoral success of the Scottish National Party (SNP) which, having ruled as a minority government since 2007, won an overall majority in elections to the Scottish Parliament in May 2011. The aspiration for independence has been the key project of the SNP since the 1970s and for over three decades the party has also accepted that a referendum would be required to legitimise this claim. The SNP has taken the view that were it to put to the UK government a clearly expressed democratic demand for independence, endorsed by the people of Scotland in a direct way, the political legitimacy of this claim would be irrefutable. Similarly, it has long been established at the level of the UK state that, as a political principle, if a majority of Scots wish to leave the UK the territory should be allowed to do so.

In the end the referendum ended in a victory for the No side, and a result of 55% to 45% seems on the face of it to be a clear victory for the unionist side. However, the author explores in this OP how the referendum was certainly not the start of the debate about the territorial organisation of the United Kingdom, and by the same measure it has not served not to end this debate. Rather, the referendum has led constitutional deliberations in a new direction, inspired by the political commitments made towards the end of the campaign by the main unionist parties which promised further powers for the Scottish Parliament in an effort to persuade wavering Scots to vote No. And it was certainly not the end of the story. Reform of the UK’s territorial constitution is now also over-shadowed by the decision taken by the British people to leave the European Union in the ‘Brexit’ referendum held on 23 June 2016. It is unclear what this will mean for devolution, and even for Scotland’s place in the United Kingdom itself, with the current SNP Government “seriously considering” a second independence referendum in order to keep Scotland inside the EU.