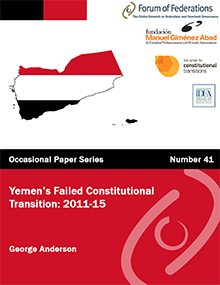 Yemen’s constitutional moment started with the exhilaration of the country’s Arab Spring and ended with the outbreak of civil war. In 2011 a popular uprising resulted in the resignation of the autocratic president, Ali Abdullah Saleh. Neighboring Arab countries quickly became engaged in steering the process, which included an election to legitimate the succession of the vice-president to the presidency, a government of national unity composed of old line parties, and, at the urging of the United Nations, a National Dialogue process on national goals and the design of a new constitution. The dialogue process was intended to be highly inclusive and non-partisan, but suffered from its inability to resolve tough questions, the absence of key political players, and the role of spoilers, including Saleh. It recommended a new federal regime, but its design was only partially developed and failed to resolve the critical issue of the number and boundaries of states. The president created a committee that endorsed his preferred scheme, which was deeply resented in the South, where there was strong mobilization around secession, and by the Houthis in the north. A Constitutional Drafting Committee was commissioned to prepare a draft. Throughout this process, the government was very dysfunctional, while the economy and security situations were deteriorating. By the summer of 2014, Houthi insurgents had progressed to the edges of the capital Sanaa, when a government decision to end fuel subsidies led to massive demonstrations and the entry of the Houthi into Sanaa, causing a crisis for the government. The Constitutional Drafting Committee finally delivered its document to the president in January 2015 and this became the trigger for civil war. The country has become even more fractured with the humanitarian disaster of the conflict and there is little sign of consensus on its constitutional future.